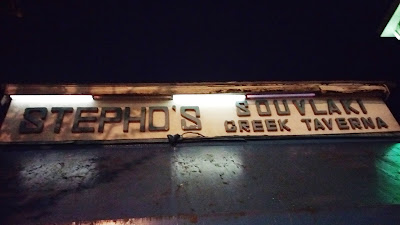 After a visit at St. Pauls' Hospital, Buddha Boy and I needed dinner.  It was almost 10pm and we were starving.  Not wanting to wait any longer, Buddha Boy suggested to go for Greek food at Stepho's Souvlaki Greek Taverna, which was just around the corner.

We don't know much about Greek cuisine but Stepho's has been on our list to try for a very long time.  Actually, Buddha Boy and I have been to Stepho's on different occasions, but that was long before we met.  :p 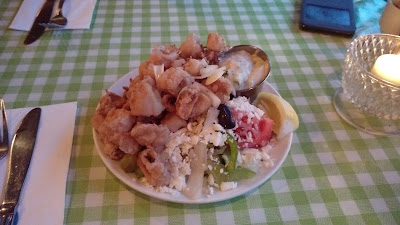 Kalamari was our first appetizer.  The squid pieces were cut too thin that the usual chewy crunch was no where to be found.  Uneven coating of batter also made the squid rings unpleasant to eat.  Honestly, the portion was not that big.  The illusion of jam packing all the food onto a small side serving plate did all the wonders. 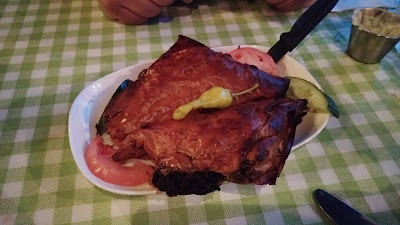 Our second appetizer was the Spanakopita, which was a disappointment.  These puff pastries were burnt in a lot of areas.  The burnt bitterness destroyed the spinach-cheese stuffing and made the whole package quite hard to consume. 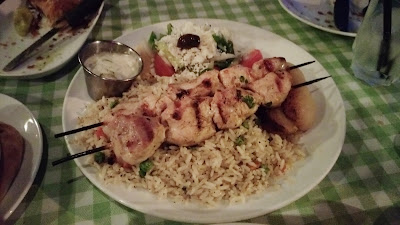 Buddha Boy had a large order of Chicken Souvlakia, which came with two chicken skewers, rice pilaf, roasted potato, Greek salad and pita bread.  The gently seasoned chicken was tender but not moist.  There were grilled marks on the skewers but the meat didn't have much char fragrance.  The accompanied salad and potato wedges were pretty boring. 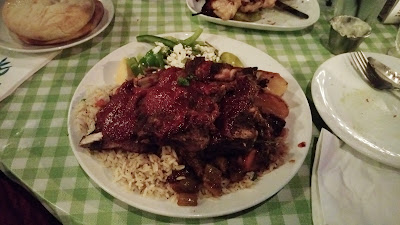 I had the BBQ Spareribs Platter, which had the baby back spareribs with barbecue sauce, rice pilaf, vege briami, roasted potato, Greek salad and pita bread.  The ribs were smothered in an overly sweet and salty barbecue sauce.  The rib meat was tender but some parts were a bit dry and the rack did not have that fall-off-the-bone balance.  The Greek-style oven-roasted vegetables had a mellow tangy savoriness that went remarkably well with the al-dente rice pilaf, which had a soft broth aroma with a quiet onion sweetness.

Generally speaking, when one's hungry, any food should taste good, right?  Not in this case.  While our tummies were full, we left the restaurant feeling disappointed and unsatisfied.

Many people proclaimed that the portions are huge and the prices are cheap, but we beg to differ.  We thought the portions did not portrayed the equivalence in its price points.  Service was friendly but sparse and slow.  Perhaps having two Downtown locations had something to do with its fame.