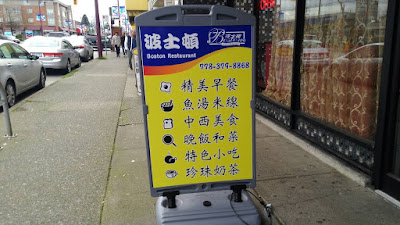 Since the night before, Buddha Boy and I have been thinking about where to eat after my doctor's appointment this morning.  After process of elimination, we narrowed the decision down to HK-style cafes (aka. tea cafes 茶餐廳).  Now the question is...where?  Buddha Boy's favorite - Silver Tower 銀座 in Richmond?  Or my favorite - Gold Stone 金石 in Chinatown?

We chose neither.  We decided to try this newly opened restaurant in our neighborhood.  Remember the old Boston Steakhouse 波士頓扒房 on the corner of Alexandra Road and Hazelbridge Way in Richmond?  The same owners returned and opened Boston Restaurant 波士頓餐廳 on Victoria Drive near 35th Avenue.

The interior was quite awkward.  With a waist-high divider down the middle, half of the restaurant was set to accommodate tables of two/four, imagine an upscale and trendy Mui Garden 梅園 (on Victoria Drive).  With a few tables of two, the other half of the room had mostly round tables to accommodate larger groups.  The two sides had different tablecloths, one had yellow/green/black/white patterns and the other had solid purple.  Quite a contrast...LOL!

I didn't take photos of inside since the restaurant was quite busy.  Don't you think it's quite rude and inappropriate to take photos of the interior with other diners in the shots?  Privacy law applies!!!  LOL! 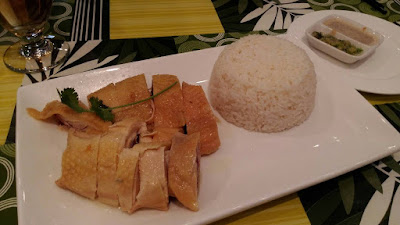 Sand Ginger Free Range Chicken on Rice 沙薑走地雞飯 was one of the daily specials which came with a drink and a soup.  For $8.95, the plate had decent potions of meat.  The chicken was done well.  The white meat was moist with salty hints of aromatic ginger.  The dark meat, while tender, was a bit boney.  Other than the kencur dip, minced ginger and scallion dip was also given. 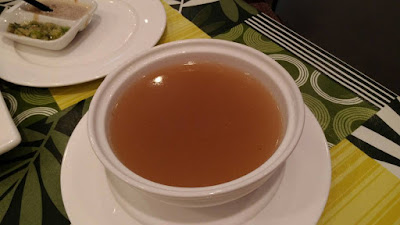 For the accompanied soup, I had the choice of HK-style Borch 羅宋湯, cream soup 忌廉湯 or Chinese soup 中湯.  I went with the Chinese soup, which was Pitahaya Flower & Pork Bone Soup 霸王花煲豬骨.  While no bone nor fiber flower strands were seen in the bowl, the broth did present the taste and the aroma of pitahaya flower.  Unfortunately, MSG and salt were also quite evident. Whenever Buddha Boy visits a new tea cafe, he would order his staple, Vermicelli in Singapore Style 星洲炒米.  For $9.25, this only came with a drink, no soup.  Instead of the usual barbeque pork (aka. cha-siu), ham was used.  Portion was decent with generous amounts of egg and crunchy big shrimps.  Curry flavor was apparent but the dish was overall bland, under-seasoned and lacked wok-hei 鑊氣 (火候).  Buddha Boy had to use table salt to enhance the taste.

Food was expedited quite fast, but the drinks were quite slow.  We did not get our drinks until late so I forgot to snap a picture.  I had the Bubble Black Tea 泡沫紅茶 while Buddha Boy had the Cold Hong Kong Style Tea with Lemon 凍檸檬茶.  Other than the drinks being a tad over-sweetened, both tea were rich and bold. 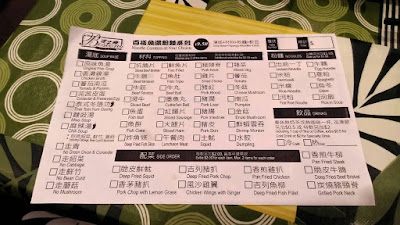 Service was prompt and courteous yet needed improvement in being more alert and attentive.  We plan to visit at least twice in the near future.  One to give lunch another try, and the other to try their dinner combination deal.