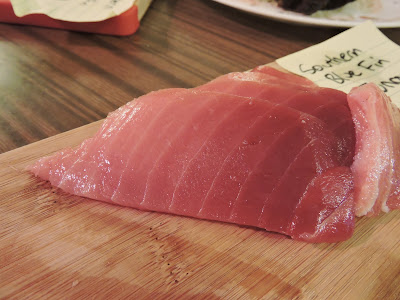 Months ago, Mr. Skipper showered us with some sashimi-grade otoro of Southern Bluefin Tuna (Thunnus maccoyii) and the eyes of Bigeye Tuna (Thunnus obesus).  But, because I had a bun in the oven, I was unable to eat anything raw.  After months of waiting (and whining), the bun was finally out of the oven and I am now ready for some quality sashimi.

This time, Mr. Skipper came to Vancouver for business on a very short notice.  And, as always, he brought us lots of goodies.  Since Mr. Skipper was in town, it made sense to invite him over for dinner so he could prep and serve the sashimi for us.  Yes, our "invited" guest had to do the work...

We also asked MomJ and her friend, AuntieBo, to join us for dinner so we could cut up more maguro loins. 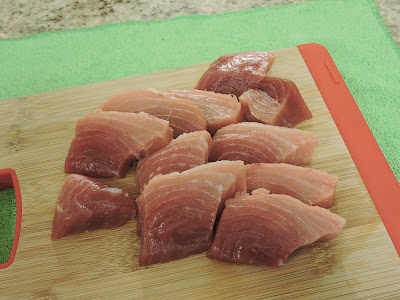 According to Mr. Skipper, most true fishermen prefer bigeye over bluefin when it comes to maguro otoro.  We never understood why until tonight...

The Bigeye Tuna Otoro Sashimi had a firm, robust and meaty texture.  It was beautifully marbled with a mild and buttery taste.  The fatty and oily flesh also had a sweet aftertaste that lingered.  This was the star of the night. 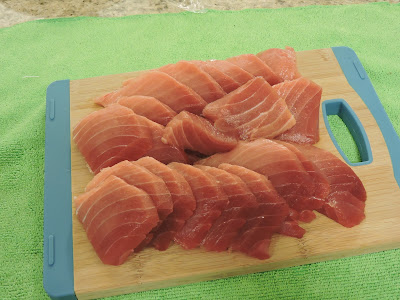 We had two plates (boards) of the Southern Bluefin Tuna Otoro Sashimi (same specie but two different fishes).  On the blue board, according to Mr. Skipper, was the better of the two loins.  This attractively marbled gourmet fish had a smooth and delicate texture with a remarkable fat content that melted instantly when consumed.  The fatty belly tissues generated a rich and creamy essence.  Unlike the bigeye tuna, the bluefin maguro did not have that sweet aftertaste. 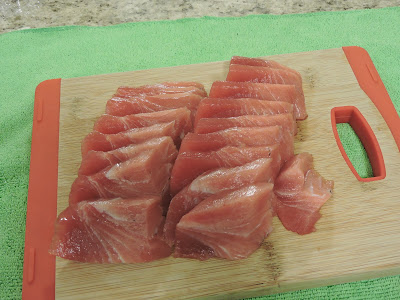 While still considered sashimi-grade, the red board of southern bluefin tuna was the weaker fish of the two.  Mr. Skipper said this loin consisted of both otoro and chu-toro because whomever processed the fish did not remove the otoro properly.  Nonetheless, this board of sashimi was still delicious and delightful. 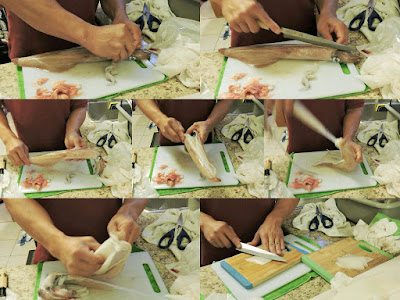 Mr. Skipper also brought us some squid that his father fished in his hometown on the Penghu Islands 澎湖縣 in Taiwan (which is also the hometown of my mom, MomM).  Commonly known as European squid, this type of pencil squid is known as Myopsina, or 鎖管 in Chinese (also known as 小卷/小管).

I have bugged MomM many times to take me to her hometown just so I could join a tour to fish these pencil squids (夜釣小管).  But, because it can only be done at night, MomM rejected my requests due to safety concerns. 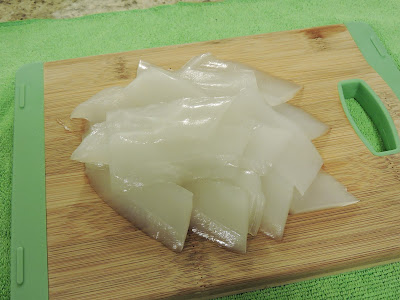 Mr. Skipper suggested to eat the Pencil Squid Sashimi with only the low-sodium soy sauce and no wasabi.  I decided to try three different ways.  My first try was without soy sauce nor wasabi.  The squid had that soft fishy aroma with a hint of fresh sea-water saltiness.  My second piece was with only soy sauce, which killed that fishiness and added a mellow sweetness to the quiet salty taste.  Finally, using both wasabi and soy sauce, it killed all that delicate elements. 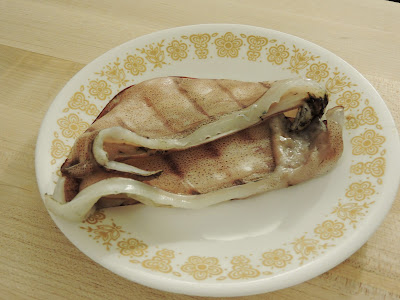 Some parts of the squid were not ideal for sashimi so Mr. Skipper asked Buddha Boy to tossed those on the grill. 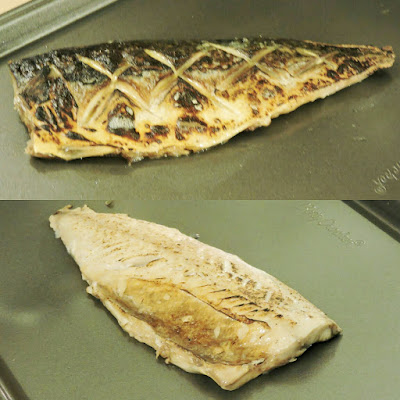 Mr. Skipper also brought us a pack of Salted Mackerel (aka, saba).  Mr. Skipper even gave us a little educational session on how healthy Atlantic Mackerels are. 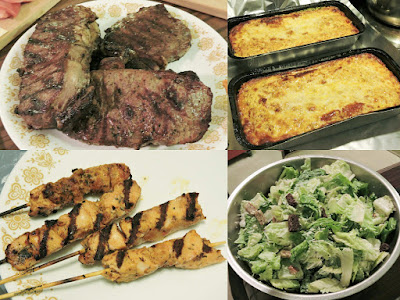 Since Buddha Boy's not a seafood fan, he made sure he had other foods for the night.  Yes, my husband has a friend in the seafood industry but my husband is not a fan of fish... 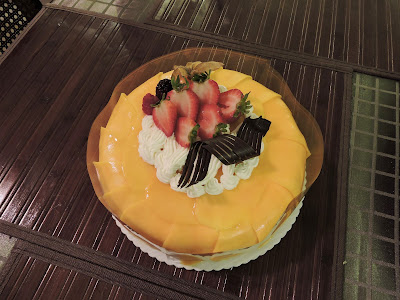 Knowing that Mr. Skipper loves sweets (especially cakes), I picked up a Fresh Mango Cake from Marui Bakery on Kingsway, one of our go-to places for cakes.
(The other bakery would be Yan's on Hastings.)

After having these sashimi, I just simply cannot go back to the normal stuff.  Yes, this is a bragging post.  Yes, we are spoiled. 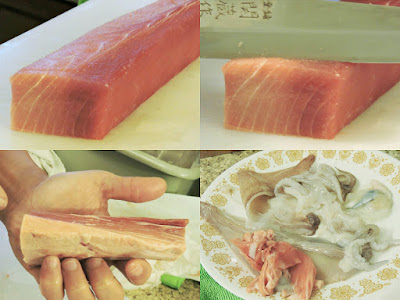