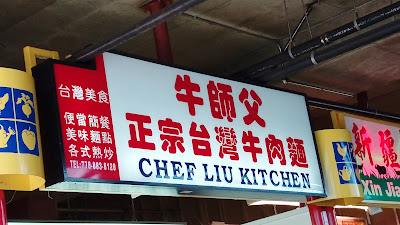 Over the years, we have tried Chef Liu Kitchen 牛師父正宗台灣牛肉麵 a number of times and we haven't had much luck with their food.  So why am I here again?  Simply put, I am a sucker for Taiwanese food...it's in my blood.

Perhaps being a food-court stall has prompted my returns.  You know, with so many selections in the Richmond Public Market, Buddha Boy could wander and hunt for whatever he desires while I have the option (or not) to be suckered in with the same depressing Taiwanese food. 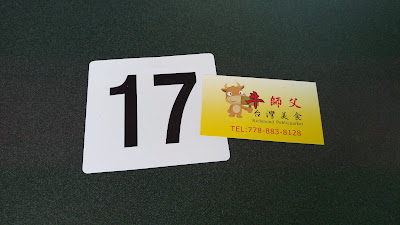 Okay, the main reason why I cam here was to satisfy my immeasurable craving for a bowl of Taiwanese pork sauce on rice.  Honestly, Buddha Boy makes awesome Taiwanese pork sauce with his secret recipe, but it generally takes him a couple of days to complete...and I just could not wait that long... 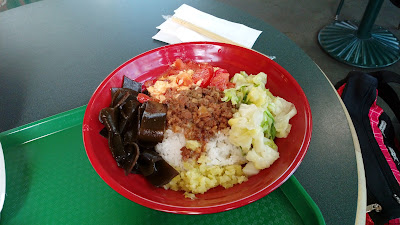 The Stewed Minced Pork Combo 肉燥飯套餐 came with three fixings in addition to what's commonly included (white rice, pork sauce, Chinese sauerkraut).  Once my order was ready for pickup, I had the option to choose the three sides.

The pork sauce was a combination of pork belly and ground pork with the latter taking the lead role.  The sauce lacked that distinctive onion sweetness and that aromatic scent from deep fried shallots was nowhere to be found.  Cinnamon taste was minimal, almost next to none.

The three chosen sidekicks were Marinated Kelp 滷海帶, Stir-fry Cabbage 炒高麗菜 and Scrambled Eggs with Tomatoes 番茄炒蛋.  The salty kelp was overcooked so the texture was very soft.  The under-seasoned cabbage was crisp and fresh.  The egg stir-fry had quite a bit of liquid, mainly due to the tomatoes chunks. 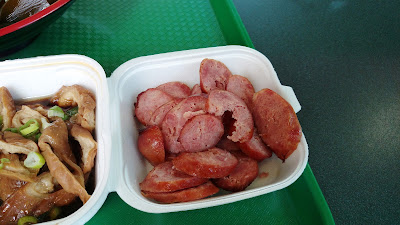 I was also craving for some Taiwanese Style Sausage 台式香腸.  The outer casing was so chewy that it was hard to break the bite.  The meat was bland, gritty and dry.  Not recommended. 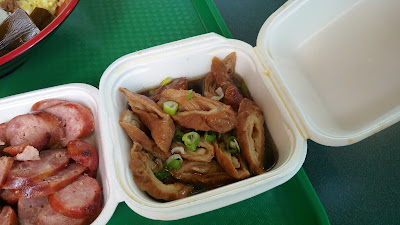 Of course, if it's on the menu, it's on my table.  Thankfully, the Marinated Pig's Intestine 滷大腸 was an enjoyable dish.  The pork bungs were cleaned very well with no disgusting residues left behind.  While Buddha Boy thought the texture was too chewy for him, I, on the other hand. thought the texture had a good balance for easy consumption. 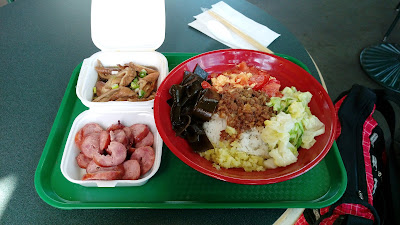 This stall, apparently, is known for its beef soup noodles, but most of the customers (at least the ones waiting line before and after us) were ordering rice combos.  As a food-court stall, this place was not cheap.  Food quantity was irrelevant to its price points.  Quality was imperceptible.

Would there be another return?  Hahaha!  Well, I am a sucker...