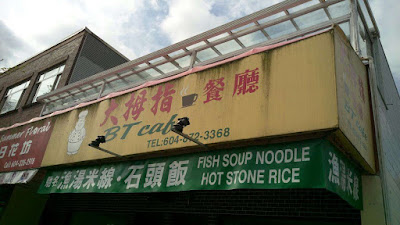 After my early morning appointment at the clinic, I was hungry.  It was approximately 9:15am and I wanted some kind of Chinese breakfast, more specifically, some kind of HK-style breakfast.  Not wanting to go far, I wanted stop by a place along my way driving home.  After a quick search online, I ended up at the long forgotten BT Cafe 大拇指餐廳 located across from ICBC Claim Centre on Kingsway in Vancouver.

I visited this restaurant years ago when it first opened.  At that time, I quite enjoyed the mix & match fish soup noodles.  Weeks later, I dragged Buddha Boy there for dinner and, while nothing spectacular, we were satisfied. 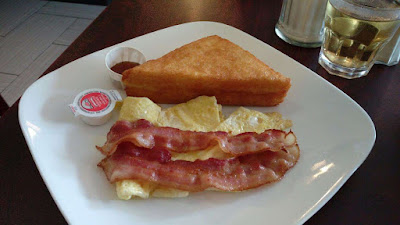 I went with a breakfast A+B mix & match deal.  From the "A" list, I chose Bacon and Scrambled Eggs with French Toast 煙肉煎雙蛋配西多士.  The bacon was not cooked crispy.  The HK-style French toast had very minimal marmalade.  Nothing to note about eggs. 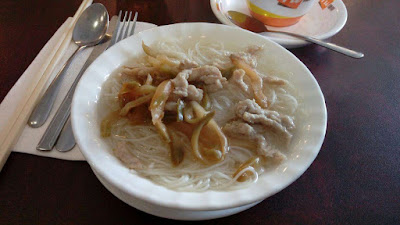 From the "B" list, I went with Preserved Vegetable and Shredded Pork with Noodles in Soup 雪菜肉絲湯米線.  The noodles were al-dente.  The preserved vegetable had an overly soft texture and was quite flavorless.  The shredded meat was lightly seasoned.  The broth was bland. 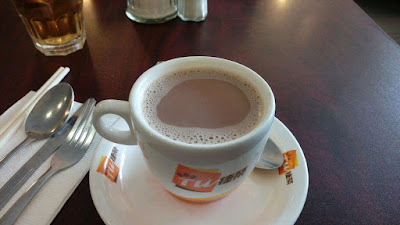 A drink was also included in the breakfast mix & match deal and I ordered a hot Ovaltine 阿華田.  The drink was diluted and weak.  Not recommended. 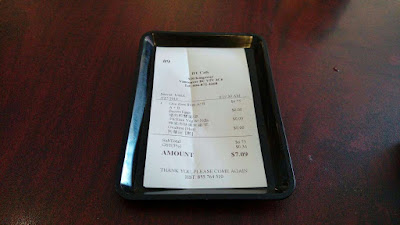 The above budget-friendly breakfast combo was only of $7.09CAD, including tax.  Unbeatable deal!

In the evening, I wasn't feeling too well and wanted a bowl of soup noodles.  I was open to anything...fish soup noodles, chicken/pork pho, wonton noodles, etc.  Buddha Boy made the executive call of taking me to fish soup noodles and I made the final say of going to BT Cafe 大拇指餐廳 again.  Yes, twice in one day, for me, that is. 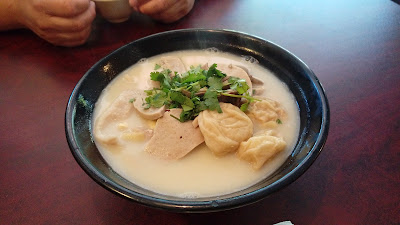 Similar to most restaurants that offers such mix & match deal, the so-called "fish" soup base is never just fish, it's usually a blend of fish and pork/chicken, or all three.  When the bowl arrived, we could smell the strong fish essence in the broth, but of course, as we took sips of it, pork bone broth was evident.  The broth was quite soothing with its strong core taste of ginger and random peppery kicks.  Honestly, I don't know how much truth lies in their clause of "NO MSG ADDED"...I was constantly thirsty after dinner.

The toppings were store-bought quality so nothing much to comment about except for the fish tofu, which tasted like it was starting to change.  The noodles were overcooked. 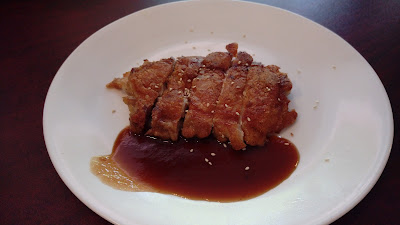 With my mix & match soup noodle combo, I could order two side dishes (one meat and one vegetable) at discounted prices.  For meat, Buddha Boy chose Teriyaki Chicken Fillet 照燒雞柳.  While soft, the chicken was slightly overcooked so it has lost its moist tenderness. 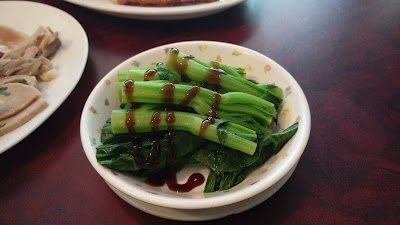 There was only one vegetable side available to order with the soup noodle combo.  According to the server, the Vegetable with Oyster Sauce 蠔油時菜 is usually blanched choy-sum, or Chinese Flowering Cabbage. 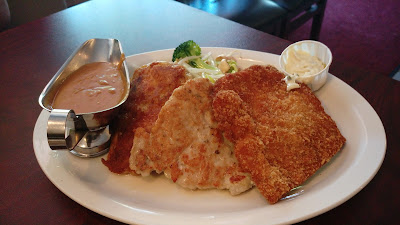 Because Buddha Boy also ordered another noodle dish, this was pretty much packed to go with the exception of pork cutlet and vegetables.  The breaded cutlet was moist with a nice crispy outer coat.  The lightly seasoned stir-fried vegetables were a mix of broccoli, bean sprouts, cabbage and mushrooms.  The garlic gravy didn't have much garlic taste. 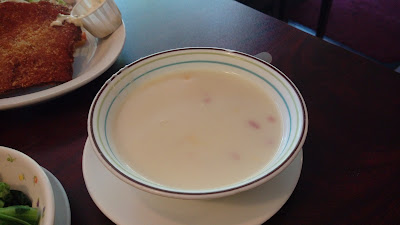 A bowl of Cream of Corn & Ham 粟米火腿忌廉湯 accompanied Buddha Boy's mix & match combo plate.  The soup had very minimal amount of corn and ham, almost next to none.  The soup was quite runny. 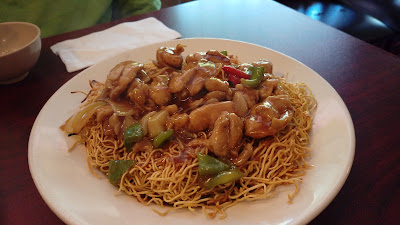 Buddha Boy wanted crispy noodles.  Originally, he wanted the common house special chow mein 招牌炒麵, but to our surprise, there's no such thing here.  Our server suggested the Satay Chicken Chow Mein 沙嗲雞球炒麵.  While Buddha Boy was satisfied with the delightful crispy noodles, the chicken meat was weak in its sa-cha seasoning. 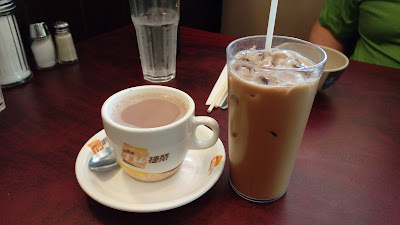 Both of our mix & match combo deals came with drinks.  With my dietary restrictions, I really didn't have much choice except to order a hot Ovaltine 阿華田 again.  Buddha Boy had a cold Hong Kong Style Tea & Coffee Mixed 港式鴛鴦.  Both failed.  These were diluted, water-down and simply lacked all the fundamental tastes in every which way. 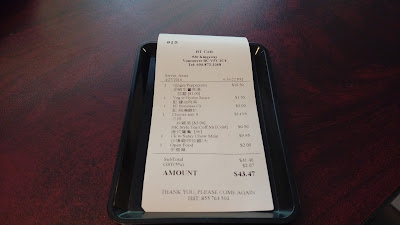 Prices were economical.  Food was acceptable.  Service was sluggish.
Since there are so many places out there that offers better food at approximately the same price points, we're not sure if we'd return anytime soon.  Maybe only for breakfast since the morning deals are unbeatable.